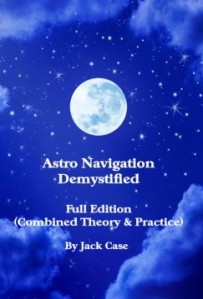 With the invention of the chronometer in 1759, mariners were, for the first time, able to calculate longitude by finding the difference between Greenwich Mean Time and Local Time.  However, the marine chronometer did not become affordable until around 1850 and so they were not widely used until about that time.  It would seem therefore that, for most of the 18th. and 19th. centuries, those mariners who were unable to obtain a chronometer would be unable to calculate their longitude.  However, there are other methods of calculating longitude which do not rely on the use of a chronometer and one of those that was widely used until the late 19th. century was the method of Lunar Distance.

The Moon completes an orbit of the Earth in 27.3 days, moving from West to East.  Therefore, in one day it will move 13o.18o with respect to the Sun, the stars and planets.  So, in one hour it will move 0.55o and in 1 minute it moves 0.009o.  These figures are approximated in the following table:

This should not be confused with the fact that, as the Earth revolves about its own axis from West to East, the celestial bodies that are visible in the sky, including the Sun and the Moon, will appear to move in the opposite direction i.e. from East to West at an approximate rate of 15o of longitude per hour.  Click here for a fuller explanation of this.

The navigator uses a sextant to measure the angle between the Moon and the Sun (or another celestial body); this is the lunar distance at his position. 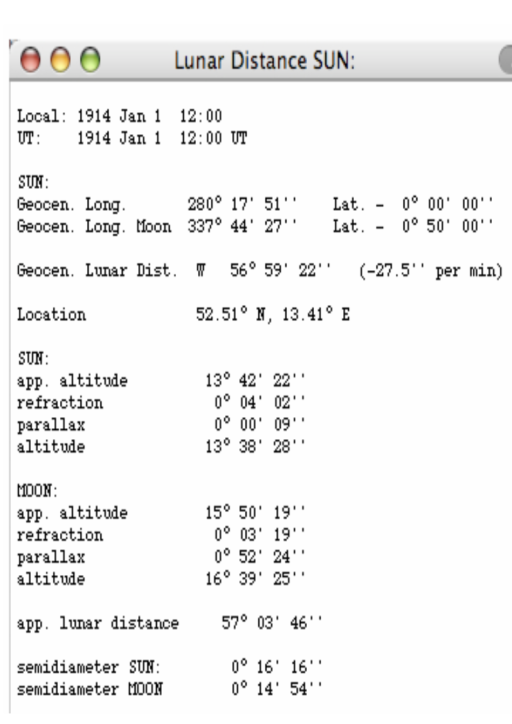 Note.  Local time can be calculated by one of several methods, one of which is to measure the altitude of the Sun to determine when it has reached it’s zenith as this will indicate the occurrence of apparent noon.  Since this can be checked daily, a less accurate time piece than a chronometer could be used to record local time for a 24 hour period.  (In the 18th. and 19th. centuries, this could have been an hour glass).

A fuller explanation of this topic is given in the book ‘Astro Navigation Demystified’.