The Intercept method, also known as the Marcq St. Hilaire method after the French Navigator who devised it in 1875, is a method of establishing a fix by measuring the altitude of a celestial body from the true position and comparing this with the calculated altitude at the DR position or the EP.  The difference between the two altitudes will be equal to the distance between the two positions and this distance is known as the intercept.

Suppose we are in a yacht and we measure the altitude of the Sun and find it to be 35o; what does this tell us?  All that we know is that the yacht lies somewhere on the circumference of a circle centred at the geographical position of the Sun.  Such a circle is known as a ‘position circle’ and when it is based on a sighting of a celestial body, as in this case, it is known as an Astronomical Position Line.  The diagram below shows that, at any point on the circumference of the circle, the Sun’s altitude will be 35o and our distance from the GP will be equal to the radius.  The problem is to establish at which precise point on the position circle the yacht lies.

At first, it might seem that all we need to do is to observe the bearing of the Sun at the same time that we measure its altitude and then draw the line of bearing on the chart along with the position circle.  In this way, it would seem that our true position would correspond to the intersection of these lines on the chart.  However, there is a problem with this idea which makes it impracticable.  Because of the great distance of the Sun from the Earth, the radius of the position circle will be very large (approximately 3000 nautical miles or so).  A chart on which such a large circle could be drawn would require such a small scale that accurate position-fixing would be impossible.

However there is another way of solving the problem.  We cannot physically measure the distance from the yacht to the GP but we can measure the altitude of the Sun at the true position and from that we can calculate the zenith distance as can be explained with the aid of the diagram below. 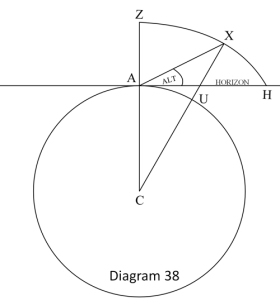 Z represents the zenith of the true position

X represents the position of the Sun

U represents the geographical position of the Sun

ZX is the zenith distance and AU is equal to the angular distance ZX in nautical miles.

Now, If we calculate what the altitude would have been at the  Assumed Position (the D.R. or E.P. position) position at the time that the altitude was measured at the true position, we would then be able to compare the two altitudes and calculate the difference between them.

Therefore distance of the true position from the apparent position

Alternatively, we could simply find the difference between the two altitudes and convert this to nautical miles as follows:

We know that the azimuth and the compass bearing provide exactly the same directional information albeit in different formats.  This begs the question: Why go to the trouble of calculating azimuth when it is easier to take the compass bearing?  However, there are essential differences between the calculated azimuth and the bearing measured by a compass.  We calculate the azimuth from data relating to the assumed position.  If we take a compass bearing, obviously we can only do that from the true position.  At the time of taking the altitude, we would not know where the true position is although we would know how far it is from the assumed position. There is also the point that the azimuth calculations relate to GMT and so the azimuth will relate to the mean sun whereas a compass bearing would obviously relate to the apparent sun.  Therefore, our aim must be to find the direction of the true position from the assumed position and we can only do this by calculating the azimuth. 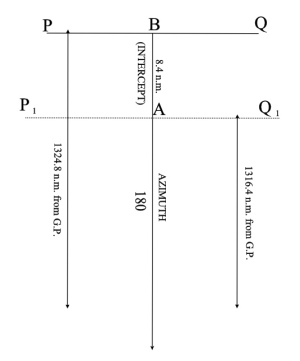 The line PBQ represents part of the circumference of a position circle of radius 1324.8 nautical miles centred at the GP on which the assumed position (B) lies.

The line P1AQ1 represents part of the circumference of a position circle of radius 1316.4 nautical miles centred at the GP on which the true position (A) lies.  The line BA represents the intercept which we have calculated to be 8.4 nautical miles in the direction 180o from the assumed position.

However, we still have only one position line whereas we need at least two position lines to make a fix on the chart.  So how can we use the intercept method to establish a fix? 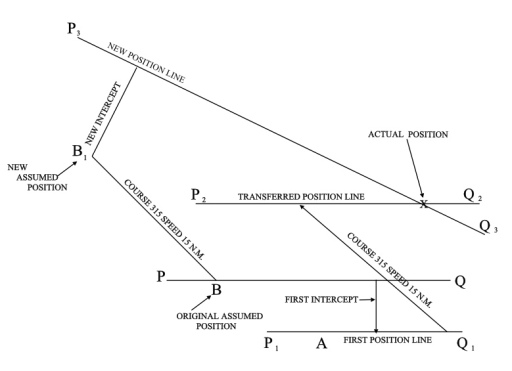 A fuller explanation of this topic is given in the book ‘Astro Navigation Demystified’.