Calculating Time In A Survival Situation

Suppose you are shipwrecked on the Skeleton Coast of Namibia or you are a survivor of an aircraft crash in the middle of the Sahara Desert; how would you tell the time?  Simple; look at your watch, you might say; all well and good if you have a watch which is in working order but the chances are that watches and other time pieces would be damaged in shipwreck and air crash situations. Even if they weren’t damaged, they would most probably be set to the standard time of the aircraft’s departure point or the zone time kept by the shipwrecked vessel whereas what we are interested in is the time at our actual position on the Earth’s surface.  You might also say “why do I need to know the time?  All I am interested in is whether it is night or day.  Well suppose for example, you want to hunt for food or look for help; you will want to know how long you have got till sunset so that you can plan your trip to get back to camp before it gets dark.  One way of keeping track of time is to make a sundial.  To do this, we need no equipment other than a few sticks and stones.

At this point it might be useful to consider what we mean by time.  Those who would like to do this, may find this link useful: The Sun as a Time-Keeper.

Making the Survival Sundial.   To be able to construct the survival sundial you will need a rough idea of the latitude of your position.  Obviously, this will be difficult in a survival situation but only an approximate figure is necessary.  For example, returning to the scenario given above, if you are in the Sahara Desert, your latitude will be in the region of 25o north and if you are somewhere in the Namibia Desert, it will be around 22o south.

We can easily become disoriented in a survival situation and at first, we might not know if the direction of the noon sun is north or south.  However, if we remember that the Sun rises in the East and sets in the west, we can easily align ourselves with north and south.

Accuracy.  Because, in a survival situation, we may not be sure of our latitude and because of the difficulty of calculating and measuring angles, we must appreciate that a sundial such as described above will not be entirely accurate.  However, trials have indicated that an accuracy of ± 15 minutes can be expected and in a scenario such as the one described above, this is considered to be acceptable. 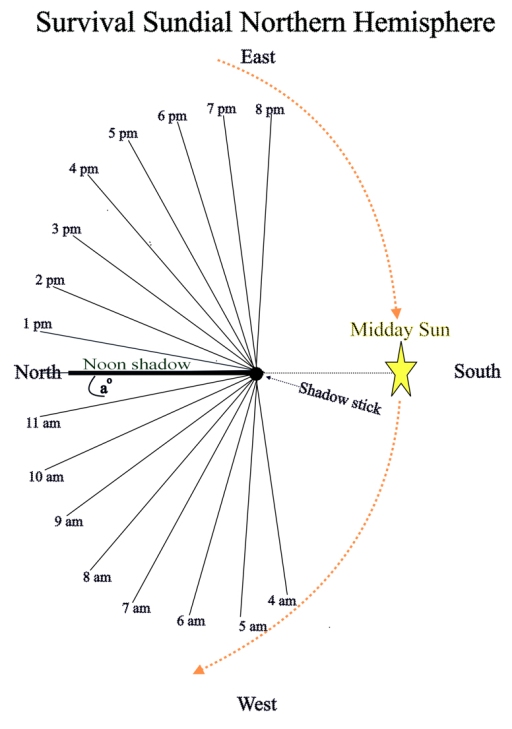 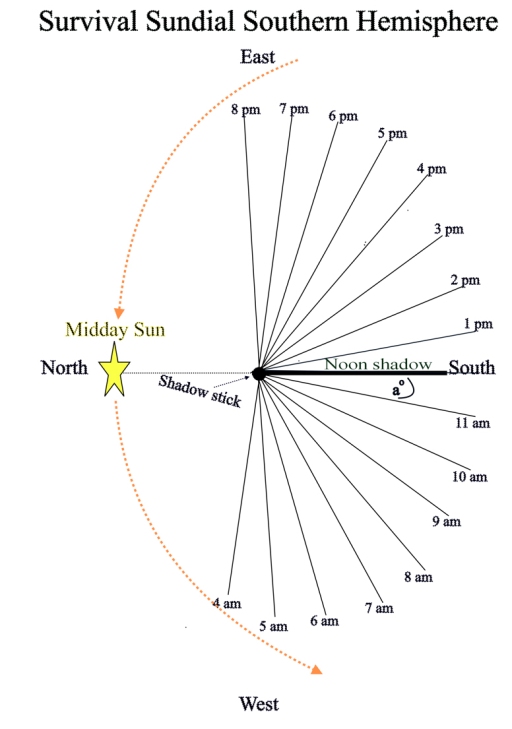 On 5th. April, the declination will be 5.1o north and so the Sun will be directly overhead at noon at latitude 5.1o north.  In this situation of course, there will be no shadow from the stick and so it will not be possible to mark the north/south line.  However, at latitudes close to the Equator, there may be another way of making the sundial. We know that within a few degrees of the Equator, the Sun rises at 06.00 and sets at 18.00 to within a few minutes of accuracy.  So marking the stick’s shadow at sunrise and then marking out the hourly increments from there, may enable us to solve the problem.

Formula to calculate angle between adjacent hour markers on dial of sundial:

Where a = angle between adjacent hour markers

The object used to cast the shadow (in this case, a stick) is known as a gnomon.  The angle between dial and gnomon is equal to latitude of observer.  Therefore, at 50o.61 north, the angle between the ground and the gnomon = 50o.61.

A comprehensive exposition of this topic can be found in the book Astro Navigation Demystified.

Astro Navigation in a Survival Situation

The Sun as a Time-Keeper

The Equation of Time

North/South Movement of the Sun.

1 Response to The Survival Sundial.