Sidereal Time.  Even though Sidereal Time is a more accurate measure of the Earth’s rotation, we normally use Solar Time for time-keeping because the Sidereal Day is not a practical unit for us to use.  On the other hand, Sidereal Time is important because it enables us to find the hour angle of a star and is therefore essential if we wish to use stars for navigation.

Solar Day.  A Solar Day is the time interval between two successive transits by the Sun across the meridian directly opposite that of the observer; that is the 24 hour interval from midnight to the following midnight at the observer’s meridian.

The confusing thing about the First Point of Aries is that, although it was in the constellation of Aries when it was chosen by the ancient astronomers, due to precession it now lies in Pisces.

Local Hour Angle (LHA). In astro navigation, we need to know the position of a celestial body relative to our own position.  In the diagram below: 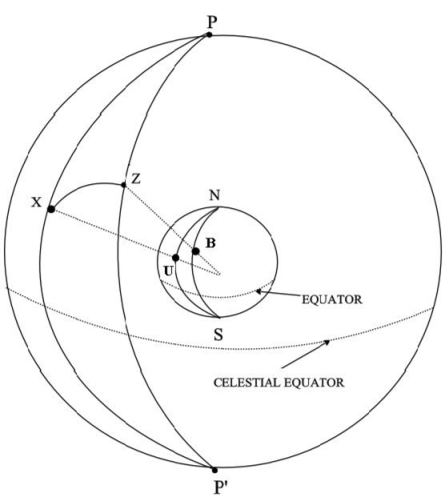 Due to the Earth’s rotation, the Sun moves through 15o of longitude in 1 hour and it moves through 15 minutes of arc in 1 minute of time. So the angle ZPX can be measured in terms of time and for this reason, it is known as the Local Hour Angle.

The Local Hour Angle between an observer’s position and the geographical position of a celestial body can be found by combining the observer’s longitude with the GHA.

Time Difference Between Meridians of Longitude

Find Your Longitude in a Survival Situation

A comprehensive exposition of this topic can be found in the book Astro Navigation Demystified.