Stars For All Seasons Part 1

Why do the stars seem to rise earlier each night?

Why do the stars that we see in the night sky change from season to season?

There are two separate reasons for these phenomena, Rotation and Revolution.

I.e. The Earth rotates about its axis while it revolves around the Sun. 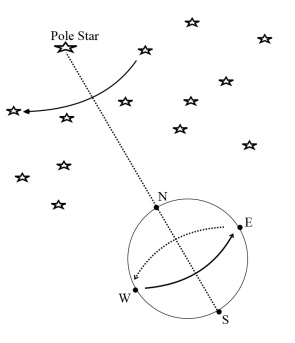 The Earth rotates from west to east about its axis of rotation which is a line joining the celestial poles and if this axis is produced far enough, it will cut the celestial sphere at a point marked by the North Star (Polaris) as shown in the diagram.  Facing north from the Earth, the Pole Star appears stationary, and the other stars appear to rotate from east to west around the Pole Star although in fact the positions of the stars are fixed and it is the Earth which is rotating from west to east.

The time taken for a star to complete a circuit around the Pole Star is called a star’s day or sidereal day.  If the sidereal day were to be exactly 24 hours, as is the Mean Solar Day, then the stars would rise and set at the same times every day.  However, the Earth completes each rotation about its axis in 23 hours, 56 minutes and 4 seconds so the stars will take the same amount of time to circuit the Pole Star and that is the length of the sidereal day. Therefore, if a star rises in the east at a certain time on a certain day, it will next do so  23 hours, 56 minutes and 4 seconds later. In other words, the star in question will rise 3 minutes and 56 seconds earlier each day (usually rounded off to 4 minutes).

For example, Say that Arcturus (the brightest star in the northern celestial hemisphere) rises at 18.00 mean time on a certain day; we know that it will rise again 23 hrs. and 56 mins. later so we can easily calculate that it will rise at 17.56 mean time the next day (4 minutes earlier).

Revolution.  In the diagram below we see the Earth as it orbits the Sun or to put it another way, we see it as it revolves around the Sun.  The positions of some of the more well known stars in relation to our Sun are also shown and it can be seen that, as the Earth follows its orbital path, different stars will gradually come into and out of view in the night sky.  For example, we will see Sirius in the night sky during the Northern Hemisphere’s winter but we won’t see it during the summer nights.  Its not that it’s in a different place, its just that it is now on our daylight side. 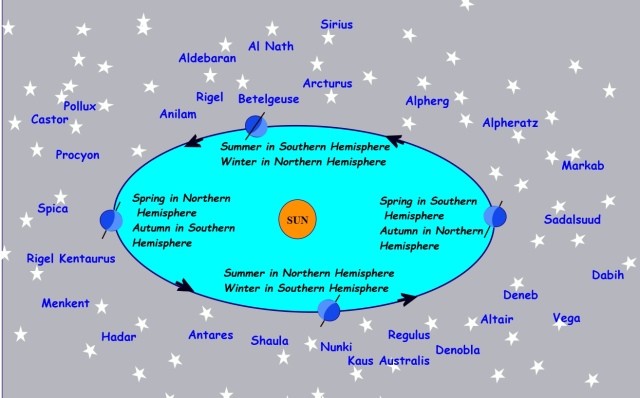 Circumpolar Stars.  Depending on the latitude of the observer, some stars will never rise or set because they will always be above the horizon, these are known as circumpolar stars.

Example.  The diagram below shows the constellations Ursa Major (Great Bear) and Cassiopeia which are both circumpolar to observers throughout the northern hemisphere and down to 20o South in the southern hemisphere.   As Ursa Major revolves about the Pole Star so do the five stars of Cassiopeia. 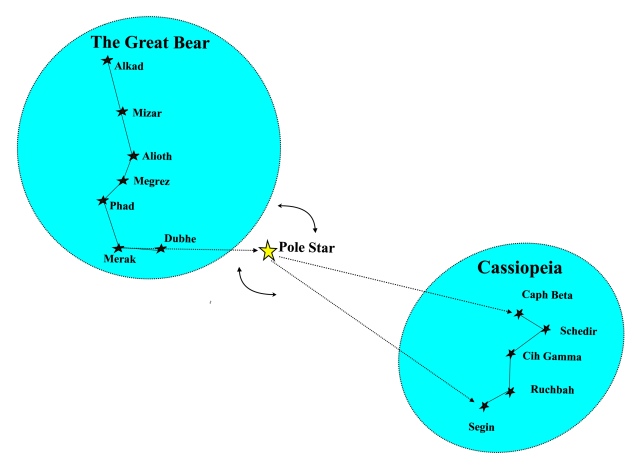 There are many other circumpolar constellations such as Ursa Minor, Auriga and Perseus in the Northern Hemisphere and Centaurus and Crux in the Southern Hemisphere; we will be looking at these more closely in future articles of this series.

In the next article of this series, we will discuss the stars that we can see in the Northern Hemisphere’s Summer sky.