Summer Stars in the Northern Hemisphere

Winter Stars in the Southern Hemisphere

The Summer Triangle.  The stars Deneb in the constellation Cygnus, Altair in Aquilla and Vega in Lyra form an astronomical asterism known as the ‘Summer Triangle’ which can be seen during Summer and Autumn in the Northern Hemisphere. The diagram below shows how the triangle is formed by imaginary lines drawn between those stars. 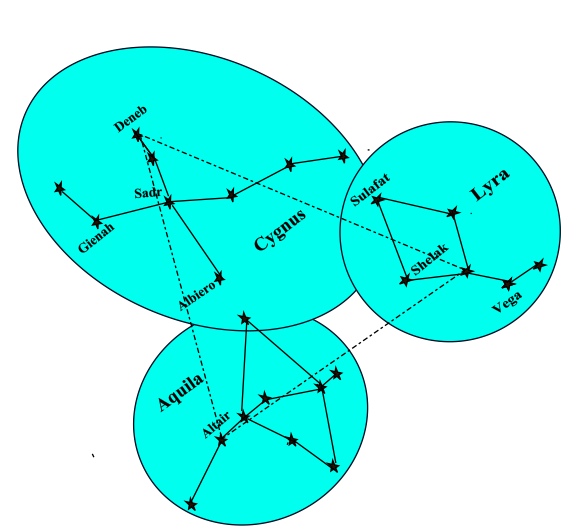 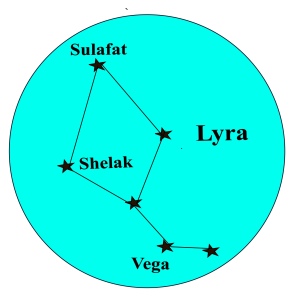 In Greek Mythology, when Orpheus died, he dropped his lyre into a river from where it was retrieved by an eagle sent by Zeus.  Zeus then sent both the lyre and the eagle into the sky as the constellations Lyra and Aquila.

Aquila, The Eagle   Aquila is visible between latitudes 85oN and 75oS and is also best seen during nautical twilight during the late summer and autumn.  Aquila contains Altair, the 12th brightest star in the sky and also a navigational star. 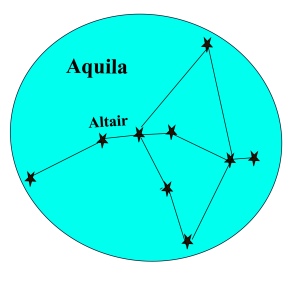 In Greek mythology, Aquila, the eagle, carried thunderbolts for Zeus and as explained above, later rescued the lyre of Orpheus from the river.

Cygnus The Swan (The Northern Cross)  The constellation Cygnus contains 6 stars, the brightest of which is Deneb, the 19th brightest star in the sky and a navigational star. As with Lyra, Cygnus is visible between latitudes 90oN and 40oS.  For navigators it is best seen during nautical twilight in late summer and autumn.  Cygnus contains an asterism formed by the brightest stars in the constellation which is named the Northern Cross. 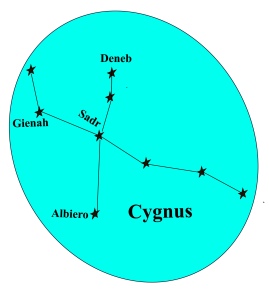 In Greek mythology, Orpheus was said to have been turned into a swan by Zeus and sent into the sky as the constellation Cygnus along with Aquila and Lyra. 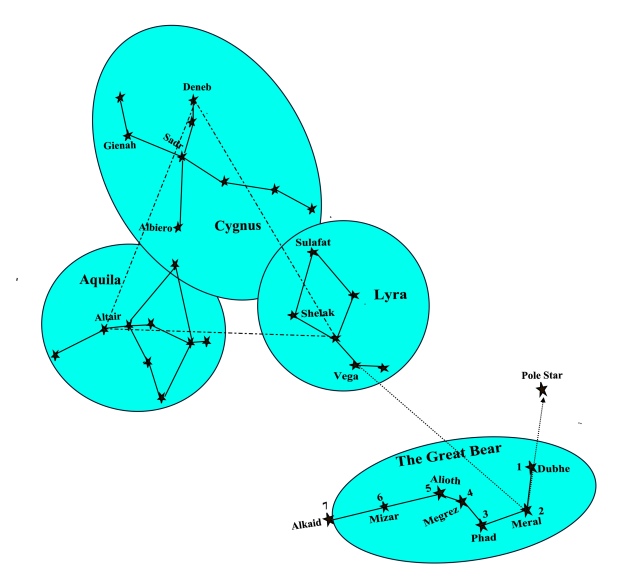 Boötes and Corona Borealis.  If we take a line from Alioth to Alkaid in the Great Bear and extend that line in an imaginary curve for about roughly three hand-spans as shown in the diagram below, it will point to Arcturus, the brightest star in the constellation Boötes.

Boötes  The Herdsman. Boötes is the 13th largest constellation in the night sky; it is located in the northern hemisphere and can be seen from 90oN to 50oS. The ancient Greeks visualised it as a herdsman chasing Ursa Major round the North Pole and its name is derived from the Greek for “Herdsman”. 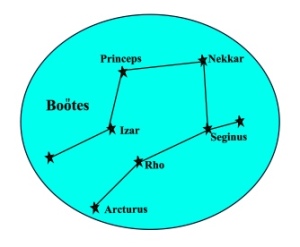 Boötes contains Arcturus, the fourth brightest star in the sky and  a navigational star.  The ancient Greeks named Arcturus the “Bear Watcher” because it seems to be looking at the Great Bear (Ursa Major).

Corona Borealis The Northern Crown.  If we next take a line from Nekkar to Princepes in Boötes, and extend that line by about one and a half hand-spans, it will point to Nusakan in the close by Corona Borealis constellation.   Corona Borealis, whose name in Latin means ‘northern crown’, is a small constellation in the northern hemisphere and can be seen between latitudes 90oN and 50oS.

The main stars in Corona Borealis form a semi-circle which is associated with the crown of Ariadne in Greek mythology.  It is said that the crown was given by Dionysus to Ariadne on their wedding day and after the wedding, he threw it into the sky where the jewels became stars which were formed into a constellation in the shape of a crown.  Alphecca, the brightest star in the group, is a navigational star and is best seen during nautical twilight in July.

Sagittarius, The Archer.  Sagittarius is a large constellation lying over the southern hemisphere and is visible between latitudes 55oN. and 90oS. It contains several bright stars including two navigational stars, Nunki and Kaus Australis which are best seen during nautical twilight in August. 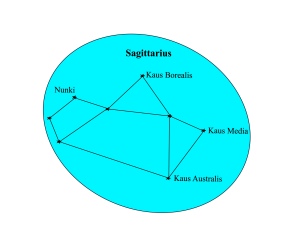 In ancient Greek mythology, Sagittarius was said to represent the Archer, a beast called a Centaur which was half man and half horse.  In the representation below, the Archer has a drawn bow with the arrow pointing to the star Antares, the heart of the scorpion, which had been sent to kill Orion. 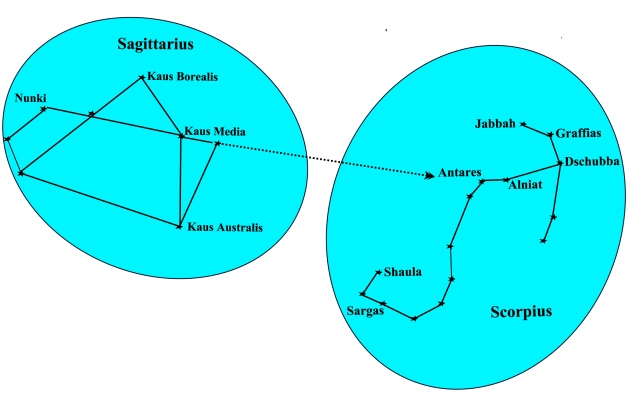 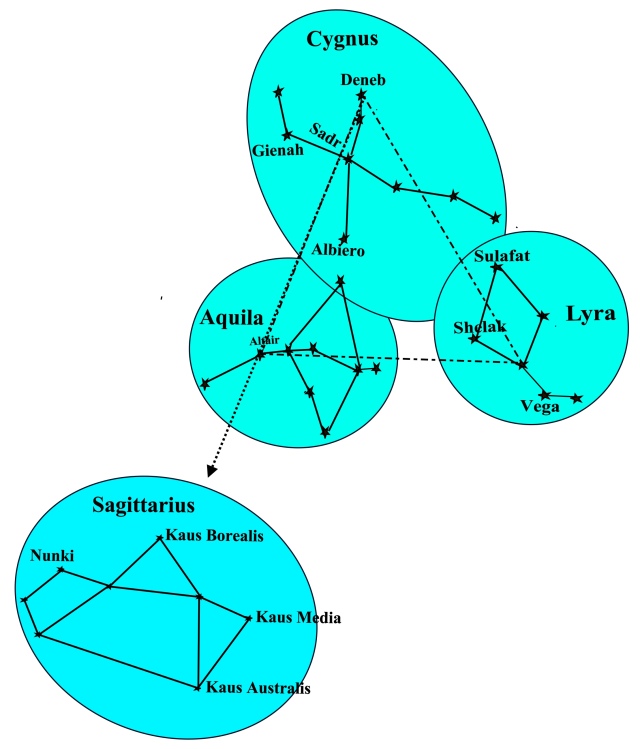 Note. Nowadays, the Sun is over the constellation Sagittarius at the Winter Solstice on 21/22 December when the Sun’s declination reaches its southernmost latitude of 23.4o south. However, in ancient Greek times, the Sun passed through the constellation Capricornus at this time hence the reason for naming the latitude 23.4o south the Tropic of Capricorn.

Scorpius (Scorpio), The Scorpion.  The constellation Scorpius lies above the southern hemisphere and is visible between latitudes 40oN and 90oS.

Scorpius has several bright stars which, between them, form the shape of a scorpion.  The brightest star in Scorpius is Antares which is often mistaken for Mars because of its reddish orange colour.  Antares is the 16th brightest star in the sky and is a navigational star.  The second brightest star in Scorpius is Shaula which is said to represent the sting in the tail of the scorpion.  Shaula is also a navigational star. For navigation purposes, Antares and Shaula are best seen during nautical twilight in July.  In Greek mythology, Scorpius represents the scorpion that the goddess Artemis sent to sting and kill Orion who had tried to ravish her.

The legend that the Archer’s arrow in Sagittarius points to Antares helps us to find and identify Scorpius. The line from Nunki to Kaus Media represents the arrow, the head of which points to Antares in Scorpio.  It also helps to remember that the orange star Kaus Media points along the line of the arrow towards the red star Antares. The bright red glow of Antares further helps us to identify Scorpius.

The angular distance from Kaus Australis in Sagittarius to Shaula in Scorpius is approximately 10o or roughly equivalent to the width of the palm of the hand when held at arms length.

In the next article of this series, we will discuss the stars that we can see in the Northern Hemisphere’s Autumn sky.