Distance to the Horizon

The Pharos Lighthouse.  The Pharos Lighthouse or the Lighthouse of Alexandria as it was also known, was commissioned by Ptolemy Soter the ruler of Egypt and completed during the reign of his son Ptolemy II in about 270BC.  It was reputedly the first lighthouse in the world and stood on the small island of Pharos just off the coast of Alexandria.  The Lighthouse of Alexandria was later declared to be the eighth wonder of the ancient world and it lasted for one and a half thousand years until it was destroyed during the 14th. Century by a combination of earthquakes and warfare.

The Disappearing Lighthouse.  Seafarers leaving the port of Alexandria would have noticed that the Pharos Lighthouse would disappear over the horizon at a distance of approximately 21 nautical miles even though it stood approximately 120 metres above sea level.  This must have been a subject of great mystery at a time when it was believed that the Earth was flat.   Could it be that this mystery came to the attention of Eratosthenes around 240BC when he was the librarian of the Great Library of Alexandria and that it inspired him to prove that the Earth is a sphere.

Calculating Distance to the Horizon    The story of the disappearing lighthouse leads us nicely to the navigational problem of calculating the distance at which an object of a known height should become visible on the horizon.  Pythagoras provides us with a method of solving this problem as shown below:

A represents a ship’s position.

B is the top of the lighthouse.

B1 is the base of the lighthouse.

C is the Earth’s centre.

r is the radius of the Earth.

h is the height of the lighthouse.

(Note. h2 can be discounted since r is many, many times greater than h).

So the formula for calculating the distance from the top of an object to the horizon becomes:  √(2rh)

Example.  Calculating the distance to an object on the horizon.

In the following example, we will imagine that the Pharos Lighthouse (ht. 120m.) is the object in question.

Note.  Since the heights of objects marked on modern navigational charts are usually given in metres, it would be easier to calculate the distance in kilometres instead of nautical miles.

Since we know that the mean radius of the Earth is 6367.45 Km. and the height of the Pharos light was 120 m. we can put these values into the formula √(2rh) as follows:

Therefore, assuming the observer is at sea level, the top of the lighthouse would become visible at a distance of 39.09 Km. or 21.1 n.m.

Summary of Formulas for finding the distance from the top of an object to the horizon, :

What about the height of eye? 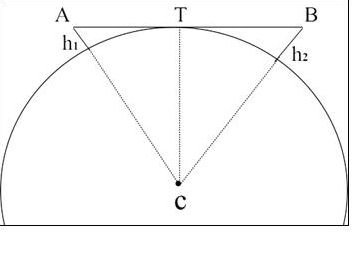 A represents the observer,

B represents the top of the lighthouse,

h2 represents the height of the lighthouse (120m.).

Using the formula that we previously established for finding the distance from the top of an object to the horizon, we have:

To convert to nautical miles, we have:

So we can see that taking the observer’s height of eye into account makes quite a difference to the result.

Summary of formula for calculating the distance that an object will appear on the horizon taking into account height of eye:

What about the height of tide?

The height of objects shown on navigational charts is the height above the level for ‘mean high water springs’ (MHWS) which is used as the chart datum for heights.  When navigating in areas where there is a large tidal range, the height of tide in relation to MHWS must be taken into account if the charted height of the object is being used in navigational calculations.  For example, in the vicinity of the Channel Islands, the height of tide at low water springs can be in the region of 7.5 metres below the level for MHWS and in such circumstances, 7.5 metres would obviously need to be added to the charted heights of objects.

(If you are a bit rusty on Pythagoras’ Theorem, you can find a brief reminder here).