Stars For All Seasons Part 4

Circumpolar Stars In The Southern Hemisphere.

Centaurus is the ninth largest of all constellations and extends from about 30o south to 61o south.  It is one of the brightest constellations in the sky and contains three navigation stars: Hadar, Menkent and Rigil Kentaurus.  Hadar and Rigil Kentaurus are circumpolar in the Southern Hemisphere from about 31o south but Menkent, the most northern of the three, is circumpolar from  55o south. 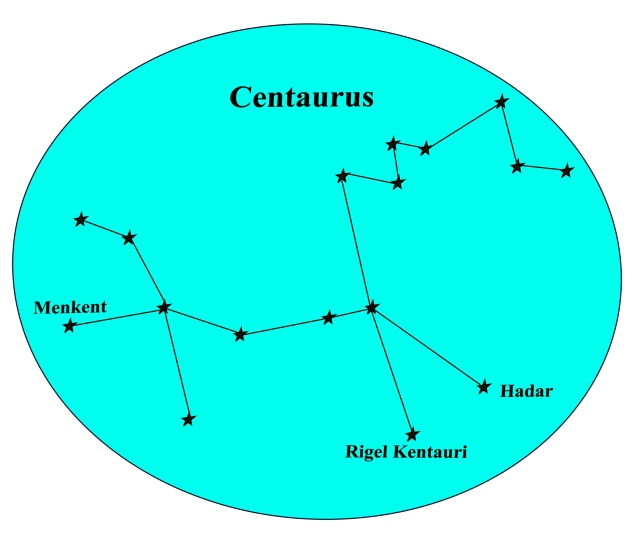 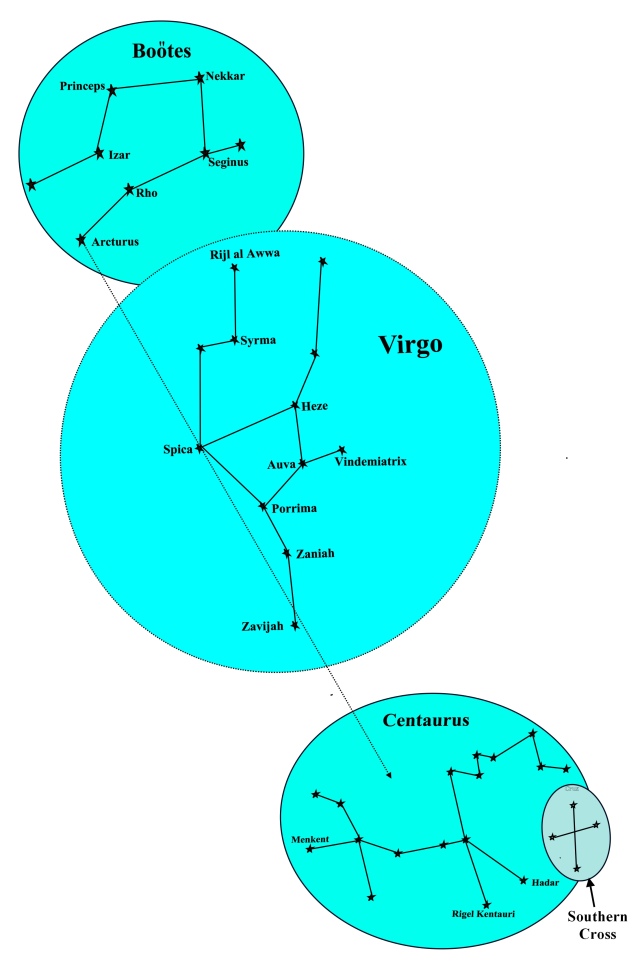 Centaurus is associated with several mythological tales and is depicted as a centaur, half man and half horse.  In Ancient Greek mythology, the constellation is associated with Chiron, the centaur who mentored many of the Greek heroes including Theseus, Jason and Heracles.

The cross has four main stars: alpha, beta, gamma and delta which mark the tips of the cross.

Alpha Crucis is also known as Acrux (a contraction of ‘alpha’ and ‘Crux’).  This is the brightest star in the constellation Crux; it is a navigational star and is circumpolar south of 28o south .

Beta Crucis, also known as Mimosa or Becrux, is the second brightest star in the constellation but is not a navigational star; it is circumpolar south of 40o south .

Gamma Crucis or Gacrux, is the third brightest star in Crux; it is a navigational star and is circumpolar below 32o south .

Delta Crucis or Palida is the fourth star and has variable levels of brightness making it unsuitable as a navigational star; like Beta Crucis, it is circumpolar south of  40o south.

Mythology.  Crux is associated with the mythology of several cultures.  Some Aboriginal cultures saw it the head of the ‘Emu in the sky’ while others saw it as representing the sky deity Mirrabooka and indeed that is the name that they gave to what we know as the ‘Southern Cross’.  In New Zealand, the Maori called the cross Te Punga (‘the anchor’) and in South America, the Incas called it Chakana (the stair).

Finding Crux.  The constellation Centaurus contains two bright stars which make excellent pointers to help us find the Southern Cross.  The Pointers as they are known, are Rigil Kentaurus and Hadar which are both navigational stars. The next diagram shows the relationship between the pointers and the Southern Cross. 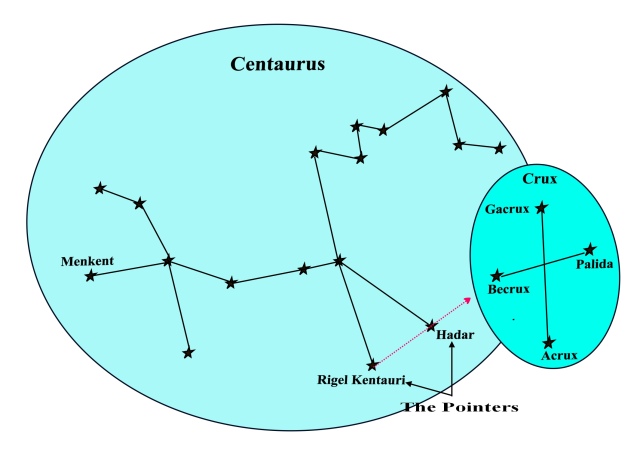 The constellation Centaurus appears to envelope Crux and indeed the ancient Greeks considered them to part and parcel of the same constellation.

In 1763, Argo Nevis was divided into three smaller constellations: Carina, (the hull), Puppis (the stern) and Vela (the sails).

Vela. Vela represents the sails of the Argo Navis.  Its brightest star, Suhail has an apparent magnitude of 1.7 and is a navigation star;  it is circumpolar below 43°S

Koo She, which is Chinese for ‘bow and arrows’, is the second brightest star in the constellation but is not considered to be a navigation star even though it has a magnitude of 1.96.  The declination of Koo She is 54°S and it is therefore circumpolar from 36°S.

Puppis was said to be the stern of the Argo Navis but was sometimes known as the ‘poop deck’.  It has only two named stars and neither of these are classified as navigation stars.

The star Naos has a declination of 40°S and is therefore circumpolar below  51°S.

The star Asmisdiske with a declination of 25°S will be circumpolar below 66°S.

The diagram below shows how the three new constellations once fitted together to form the ship Argo Navis and if we continue to think of them in that way, we will have a ready-made aid to  locating them in the night sky.

Triangulum Australe (The Southern Triangle).This is a small constellation located over the southern hemisphere. Its name is Latin for “the southern triangle”, which distinguishes it from Triangulum, the Summer Triangle, in the northern sky.   Its name is derived from its three brightest stars Atria, Betria and Gatria which form an almost equilateral triangle and are sometimes called the ‘Three Patriarchs’.   Atria is the brightest of the three and the only navigation star in the constellation.  Atria and Gatria are circumpolar at latitudes greater than 21°S while Betria, the northernmost of the three, is circumpolar below  28°S. 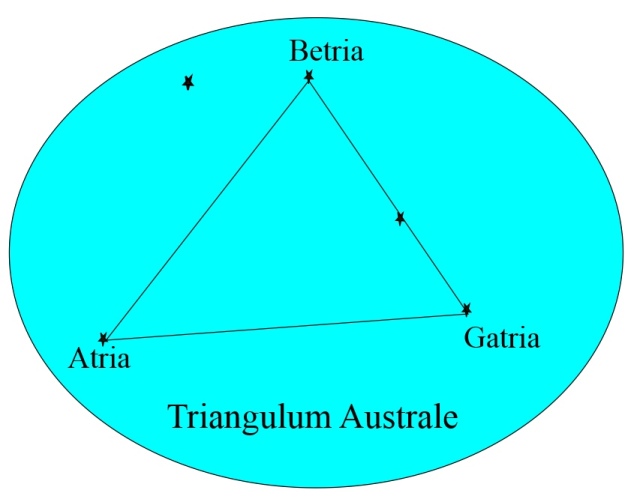 Finding Triangulum Australe.  As shown earlier in this article, the stars Rigel Kentauri and Hadar in the constellation Centaurus can be used as  pointers to the star Becrux in the Southern Cross (Crux).  If we line the pointers up in the opposite direction, that is pointing from Hadar to Regel Kentauri and extend that imaginary line by about 15 to 20 degrees it will point to Betria in Triangulum Australe.  The diagram below demonstrates this. 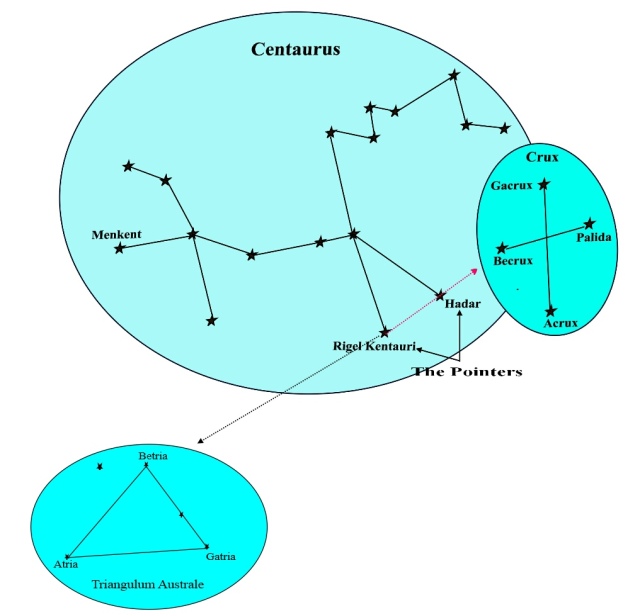 Pavo.  This is the last constellation that we will visit in this article although there are many more that we could discuss.

If we draw an imaginary line between the stars Gatria and Atria in Triangulum Australae and extend that line westwards by about 20° it will point to the star Peacock, the brightest star in the constellation Pavo.  Peacock, is a navigation star and is circumpolar below 34°S as are all the stars in Pavo.

Some of the stars in Pavo form an asterism called “the Saucepan”, which has been used as a navigational tool to point toward the southern celestial pole; however, because most of the stars in the saucepan are very faint, it is difficult to pick it out with the naked eye.   Another method is to imagine a line from the star Peacock to the star Delta Pavonis, the third brightest star in Pavo, and as shown in the diagram above, this line will also point to the Celestial South Pole.