Meridian Passage occurs when a celestial body crosses the observer’s meridian of longitude and at that instant, it will reach its greatest altitude above the observer’s horizon. The following diagrams will help to explain how the latitude can be calculated from the Sun’s declination and altitude at Mer. Pas. 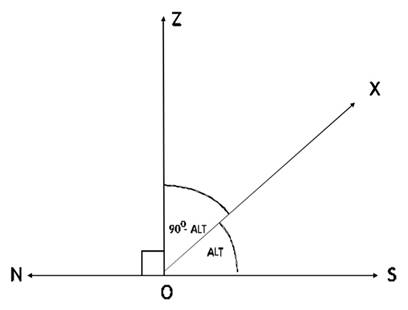 O represents the position of the observer.

X represents the position of the Sun.

Z represents the zenith which is an imaginary position exactly above the observer so that OZ is perpendicular to NOS.

Angle XOS represents the altitude of the Sun.

There are three cases to consider:

In this diagram where both latitude and declination are in the same hemisphere but latitude is greater than declination, the following is true:

In this case, where latitude and declination are in the same hemisphere but declination is greater than latitude, the following is true:

The third case is represented by this diagram.

In this case, where latitude and declination are in opposite hemispheres, the following is true:         Latitude + Declination  =  (90o – Altitude)

The rules for the three cases are summarised as follows:

(i)  Latitude and declination same names but latitude greater than declination:

(iii) Latitude and declination opposite names:

Applying the Equation of Time when calculating longitude at the Sun’s meridian Passage.

Although the imaginary Mean Time gives us an accurate measurement of time, it presents the navigator with a problem.   When fixing his position by an observation of the Sun, he measures the altitude of the True Sun which keeps apparent solar time.  However, he notes the time of the observation from a deck watch that keeps mean solar time.  To enable us to connect mean solar time with apparent solar time, we have the Equation of Time which is defined as follows:

In other words, the equation of time is the difference between apparent solar time and mean solar time taken at the same instant at one place.

The equation of time can be either positive or negative depending on the time of the year.

The Equation of Time for 00h (anti-meridian) and 12h (upper meridian) for each day is printed at the foot of the Nautical Almanac daily page as shown in this extract.  The Local Mean Time of the Sun’s Meridian Passage is shown in the column to the right of the EOT. (This is the apparent time of Mer Pas adjusted for EOT to give the LMT and rounded up to the nearest minute).

If the time of Mer. Pas is shown to be greater than 1200 then the EOT must be positive, if less then negative.