What Is The Mason Dixon Line

When cartographers such as Samuel De Champlain and James Cook plotted the coastlines of North America in the fifteenth and sixteenth centuries respectively, they would have used instruments such as the astrolabe and the sextant to measure the altitudes of celestial bodies in relation to the horizon.  Such instruments would have been of little use to Mason and Dixon amongst the forests and hills of Delaware and Pennsylvania where the horizon would not be visible so, instead of measuring the altitudes of celestial bodies, they used a device called a ‘zenith sector’ to measure the zenith distance, that is the angle between their zenith and the celestial body. 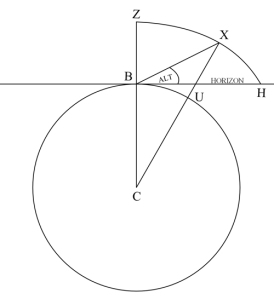 The zenith sector is a far more accurate instrument for measuring angles than the sextant for several reasons: 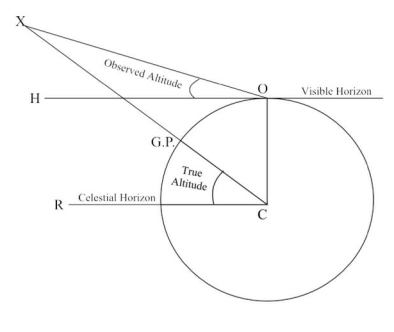 Point O will be approximately 6367 Km. from the centre of the Earth and so it would seem that the visible horizon is bound to be slightly offset from the celestial horizon.  Because of the vast distances of the stars and the planets from the Earth, we can assume that, in their cases, the celestial horizon and the visible horizon correspond with very little error.  However, in the cases of the Sun and the Moon, which are relatively near, a correction called Parallax must be added. 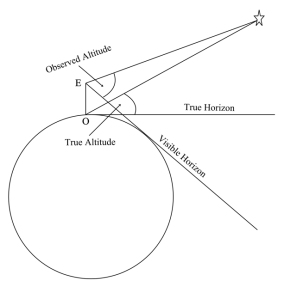 In the diagram, O is an observer’s position on the Earth’s surface and E is the position of his eye.  We can see that, as the observer’s height of eye is raised above sea level, his visible horizon ‘dips’ below the true horizon and so the altitude measured at E becomes greater than that measured at O.

Dip is the error caused by this difference and has to be subtracted from the reading.

The method used by Mason and Dixon to calculate latitude.  To an observer on the Earth’s surface, a celestial body will rise in the east, ascend until it reaches its zenith and then descend until it sets in the west.  When the body reaches its zenith in relation to the observer, it will be over the observer’s meridian of longitude.  If, at that moment, the observer were to measure the angular distance from his zenith to the celestial body, he will have measured its zenith distance.  Since the body is over the observer’s meridian, its bearing will be either north or south (unless of course it is overhead).

Say, for example, we calculate that a star’s zenith distance is 5o 15’ while its bearing is due south, we can conclude that our latitude is 5o 15’ north of the star’s declination.  If the declination of the star is 39o 30’ North, then our latitude must be 39o 30’ + 5o 15’, that is 44o 45’ north.  This in essence is the method used by Mason and Dixon when using a zenith sector to calculate latitude.

The reason that they chose to use stars for their observations is that the declinations of the stars change very slowly and can be considered to be almost constant for up to a month at a time.  The declinations of the Sun, the Moon and the planets change rapidly in comparison with the stars and to use these celestial bodies would have made their calculations more complicated.

Zenith. The point on the celestial sphere directly above the observer is called the Zenith. The term zenith is also used to refer to the highest point reached by a celestial body during its apparent orbit around a given point of observation.

The celestial horizon is the projection of the observer’s horizon onto the celestial sphere.

The zenith distance is the angle between the direction of the celestial body and the observer’s zenith.

Declination.  The Declination of a celestial body is its angular distance North or South of the Celestial Equator.