Calculating Changes in Longitude and Time Along a Parallel of Latitude.

If two ships are both positioned exactly on the Equator but are separated by 900 nautical miles in an east/west direction, then in terms of longitude, they will be 15o apart and in terms of Greenwich Mean Time, they will be 1 hour apart.  If however, they both move to latitude 50oN maintaining a distance of 900 nautical miles between them, they will find that their difference in longitude has increased to 23o.36. and their difference in GMT has increased to 1.5 hours.

What are the reasons for these differences?

From this, it becomes obvious that there is a direct relationship between arc and mean time such that 1 minute of time equals 15 minutes of arc.  We know that the angular distance between meridians of longitude at the Equator is 1o and that 1o equates to 4 minutes of time so we can conclude that the mean time difference between adjacent meridians of longitude is 4 minutes.

Returning to the original question again, we have calculated that the ships are separated by 15o of longitude which in terms of GMT, equates to a time difference of one hour.

Note. Universal Time (UT).  The term Universal Time was adopted internationally in 1928 as a more precise term than Greenwich Mean Time, because GMT can refer to either an astronomical or a civil day. However, the term Greenwich Mean Time persists in common usage to this day and is generally considered to be synonymous with the term Universal Time.  It should be noted that the Nautical Almanac and other tables of astronomical data usually refer to UT instead of GMT.

Longitude and Distance Along a Parallel of Latitude.  The diagram below shows that, as the meridians of longitude move away from the Equator, they draw closer together until they eventually converge at the poles. 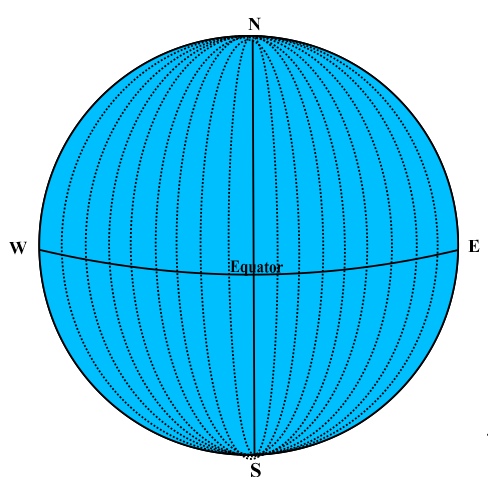 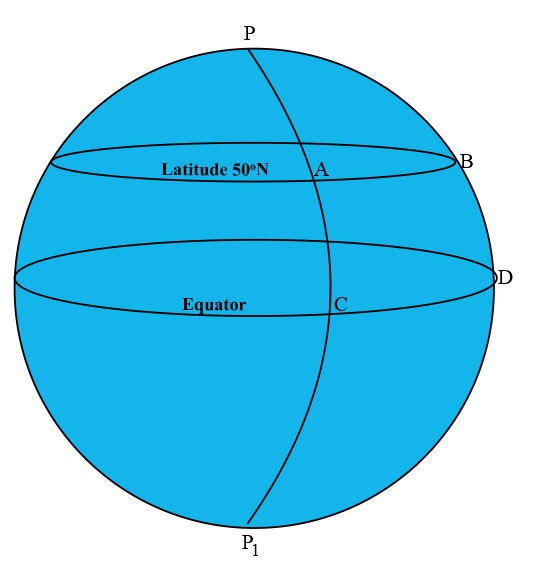 To Calculate The Distance Between Two Meridians Along A Parallel Of Latitude.  The following formulae are used for calculating the difference in distance along a parallel of latitude (Ddist) corresponding to a difference in longitude (Dlong) and vice versa.  The formulae are simply stated below without explanation but if you wish to see a full explanation of their derivation then click here).

A more detailed treatment of this topic can be found in the books listed below.